A lane for cars, and bikes

Perhaps the most infuriating thing a driver can say to a cyclist while lecturing the (incorrect) rules of the road is “I’m a cyclist too.”

Let me explain a little something about the way I tend to behave while biking. With very, very few exceptions, no manoeuvre I make on the road is performed with the sole purpose of slowing you down or pissing you off. Rather, some acts that can be observed as such are done for completely different reasons, usually for the sake of safety. One such act is stopping at the left-hand side of a lane.

For those of you unfamiliar with Huron Street in Toronto, it is a two-lane, two-way street north of College Street. I have a street view grab below. 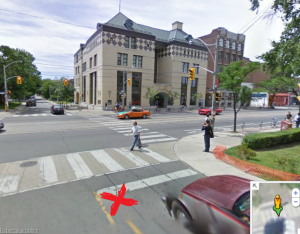 Often when I am continuing south on Huron, and always when turning left onto College, I will stop at the left-hand side of the lane, where the childish red “X” is drawn above. The purpose for this is that at red lights, cars will often attempt to turn right on red, which they very well may, but it puts cyclists waiting by the curb in a perilous position where they can get stuck behind, or, worse, hooked by the turning car. By stopping at the left-hand side of the lane, a right-turning car can easily and, more importantly, safely pass me, turn right, and we will both be on our merry way. If someone is continuing straight, they can patiently wait until I can get back over to the right of the lane until they can pass (in the event that they are even going faster than me, which isn’t often given the low speed of the road).

Today, however, a woman pulled up to my right and informed me that I was “in the lane for cars.”

Now, as any informed road user should know, there is no such thing as a lane for cars and cars only with the exception of the DVP, the Gardiner, and the 400-series highways, and particularly not on a narrow, two-lane, two-way, low-speed road; the lane is, in fact shared. So, I replied, although somewhat ambiguously, “no, the lane is for everyone.” I proceeded at the green light, and took the lane given several parked cars ahead and several stopped cars at a four-way stop ahead. The woman tailgated as closely as possible for the next block, and since her window was still rolled down, I attempted to give a better explanation as to why I was stopped where I was in the lane.

Her response to me, and I am quoting as closely as I can remember, was, “You know, I’m a cyclist too, and there are other ways to can safely stop and still keep people from turning right in front of you. You should stop in between the two cars.”

I replied, “I’m sorry, but I don’t understand at all what you mean.” Which is true – there physically isn’t room for there to be two cars going south to be side-by-side, let alone give me space to get through.

And so, with a huff, she gave up, turned left, and was gone.

Why does this bother me? Well, for one, it bothers me that someone who believes something so blatantly false about how to use lanes is driving. But on the other hand, this is someone who doesn’t understand how bikes share the road with cars, yet supposedly bikes on a regular basis. And one doesn’t get the luxury of defining their own tules of the road by virture of simply being a cyclist (just like me!). I fear both for her safety and for the image of cyclists. And with the number of close calls for cyclists getting in the path of right-turning vehicles, I’m a little appalled that someone would think that the safest way of doing things is illegal when, in fact, it is not.

Anyway, the point of my long-winded story/PSA is thus: please understand that when a bike is waiting at a stop light at the left-hand side of the lane, they are likely just trying to be considerate. And please, before you go out in a car or a bike on any road, know the rules.

Brewmaster student, academic refugee
View all posts by rmcw →
This entry was posted in BikeTO. Bookmark the permalink.